Aside from simple city breaks to the likes of Copenhagen, Brussels and Edinburgh, our #MattTheTrips adventures are more often than not reliant on a car. But without a master drone operator, or a Jeremy Clarkson-sized budget, it’s hard to get the road trip element across in these posts. The 3am drive through the mist to reach Crater Lake in time for sunrise; kazooing our way over the Golden Gate Bridge to Ride of the Valkyries; cruising around Dolomite hairpins in neutral lest we run out of petrol – that kind of thing. So here’s an early 2018 resolution – more video on MTL next year. Until then you’ll have to make do with GIFs and boomerangs. And feel free to buy me a drone for Christmas.

Then there’s the car itself, the fifth Beatle, the unsung hero of the piece. We usually get very attached to our vehicles (we miss you Rustle), but they rarely make it into photos. So when Volkswagen approached me to take out one of their cars on a #MattTheTrips jaunt, I was pretty keen and more than happy to feature it in some snaps. Which brings me to today’s post – a trip to Suffolk to visit Burnt Mill Brewery, via Audley End in Essex. VW sent over a shiny Passat Estate GT for us to play with, and once Ali got to grips with the automatic gearbox, we were soon powering up the M11 to Saffron Walden. Hopefully this is the first of many VW escapes – enjoy!

Our first stop was Audley End, a Jacobian mansion and gardens just outside Saffron Walden that is looked after by English Heritage. Between November & March, the house is closed, but you can still access the gardens and stables for a reduced fee (around £10 for adults) at the weekends. There’s plenty to see around the grounds, and you can even pop in to see Father Christmas in the festive season. They also run a series of Enchanted Audley End nights (which tend to sell out) where the gardens are transformed after dark by lanterns, music and more. We entertained ourselves with cameras, fairy lights and a glass ball for an hour or so before it was time to push on.

Leaving Essex behind, we got back in the car and set off for a freezing cold barn in the middle of Suffolk. Why? To say hello to our friends at Burnt Mill Brewery. I first met owner Charles back in July when he released his beers to the public at The Bottle Shop in Bermondsey. His flagship Green Path IPA was an instant hit, featuring mosaic, citra and enigma hops. It’s tropical, juicy and dangerously drinkable at 6%. Pintle, a delicate 4.3% citra and cascade pale ale has been a regular on The Hop Locker tap list in London the last few weeks, proving popular with those who need a break from all of the hazy DIPAs that have flooded the beer geek market of late.

We parked up in front of the 2100 sq ft brewery, a spacious former grain store just outside Stowmarket, where we were greeted by Charles and one of the many dogs that roam around the farm. I should point out at this stage that they aren’t set up for visitors, I just asked nicely if I could come and poke around with my camera. That said, there is a lovely row of taps attached to their cold store (which seems surplus to requirements in chilly December) but Charles seems less concerned about setting up a bar than creating an N64 Goldeneye den – I truly hope this becomes a reality.

In the absence of Burnt Mill branded glassware, we filled up an assortment of scavenged tasting glasses with some fresh beer straight from the tanks and cold store. Head brewer Sophie de Ronde selflessly creates beer that she can’t drink on account of a gluten intolerance, but they have just released their intriguing 4.5% Steel Cut gluten free oat pale ale that we had a sneaky taste of to start. The mash bill is made up of oats, buckwheat, maize and sorghum, and the beer is dry hopped with summer and enigma. It’s a refreshing, aromatic and subtle beer. Another we sampled was Cornerstone, a soon to be released 4.8% dry hopped porter with cascade, chinook and centennial. It’s packed full of flavour and perfect for this time of year. 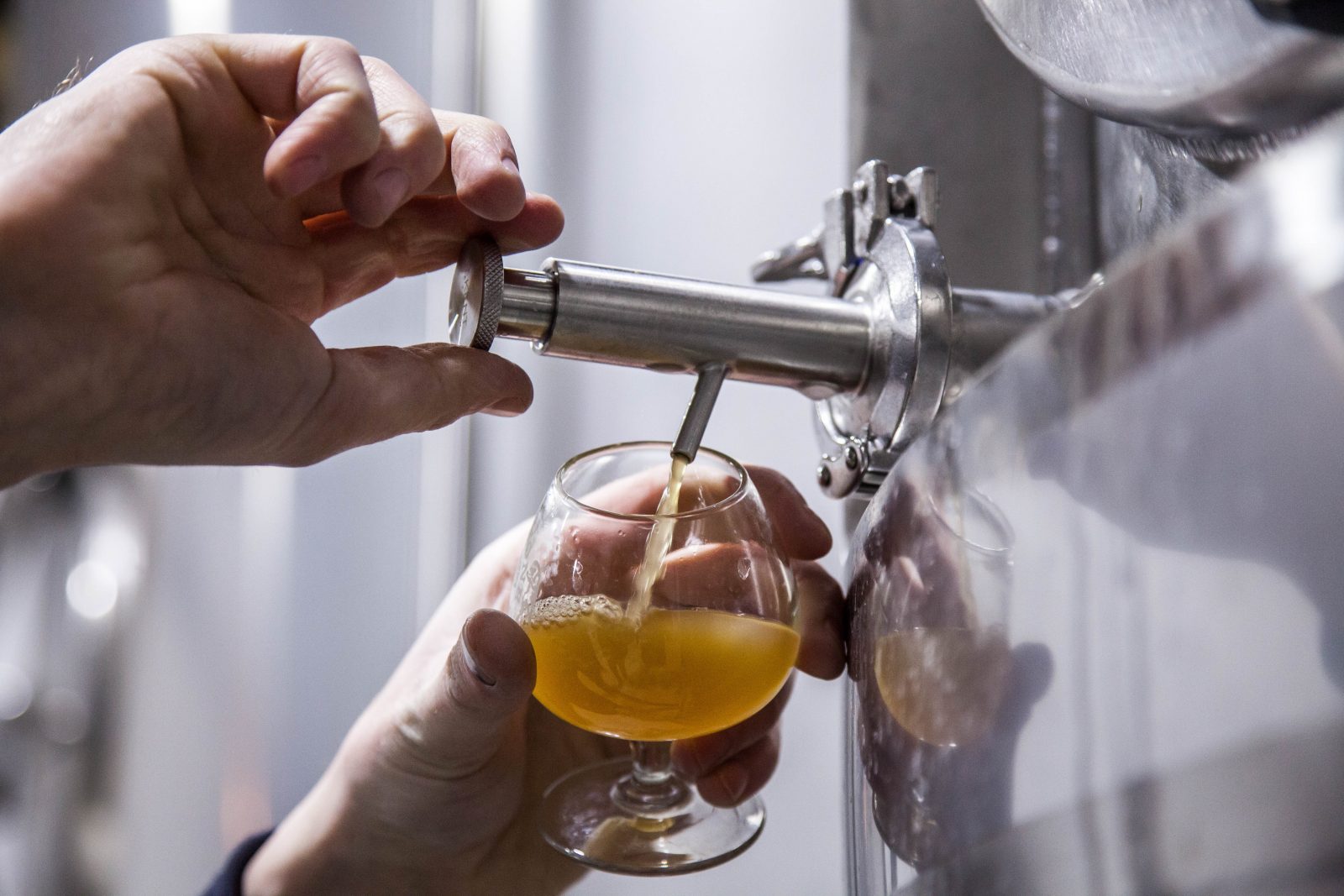 Their 15 BBL steam fired brewhouse turns out 2400L with each brew, and the beers then stay in their three 2400L conical fermenters all the way through the fermentation process until they are force carbonated. At first everything was packaged to keg, but they have recently started canning – the stylish results can be seen below.

After a tour of the brew kit, Charles lit a barbecue for us to huddle around as we tucked into a can or two, including the smooth, hoppy 6.5% Eastview IPA pictured below that features simcoe, ekuanot and HBC 431. Time flew by, beers and stories were shared, and darkness soon descended, prompting us to get going before we outstayed our welcome. Whilst Burnt Mill is still very young, it is clear that Charles & Sophie are taking it in the right direction. They are making consistently high quality beers in a variety of styles, extracting fantastic flavours from the hops and experimenting with mash bills. I look forward to seeing their progress in 2018, particularly as they hope to start using base malt from the farm. I’m also keeping my eye out for the results of their recent collaboration brew with Fieldwork Brew Co which promises to be rather special. Many thanks to Charles for the kind hospitality, and kudos to Sophie for the superior beers!

To break up the drive back to London, we sought out a country pub, settling on The Queen’s Head in Hawkedon after several recommendations. They haven’t discovered Burnt Mill’s beer yet, so we settled for the likes of Adnams Best Bitter and Woodforde’s Wherry, but really we were there for the steak and ale pie and a roaring fire. They didn’t let us down. From there, it was a 90 min drive or so back to East London in our trusty VW, and then pretty much straight to bed after an eventful day on the road. Whilst this isn’t the first time we’ve jumped in a car and explored the counties around London, it doesn’t happen often enough. I’m already plotting escapes to the likes of Burning Sky, Wild Beer Co, Oliver’s Cider and more in the new year, so stay tuned for more adventures!

Thanks to Volkswagen for providing us with a car for the weekend. This is not a paid-for promotion, and there were no demands for content from VW. Thanks also to Ali & Ella for their contributions in the form of driving, photography, posing, shivering, drinking and more.