Alex Wolpert, the founder of East London Liquor Company, is a man of his word. I first found this out when a late night negroni-fuelled assertion to me that “YOU WILL LOVE BOURBON!” was subsequently turned into a legitimate tasting event of the same name, aimed at corn-verting me (sorry, not sorry) to American whisky. And at that very event back in March, after a decent number of drams, Alex suggested that it would be fun to combine my #MattTheTrips jaunts with his forays abroad to spread the good word about ELLC’s spirits, starting with some under-appreciated European cities. Sure thing, mate – sign me up for mythical gin-based travel. But, lo and behold, a few months later, flights were booked, hotel rooms were reserved, and planning began for the first edition of Matt & Alex’s Boozy Adventure – 36 hours in Vienna. 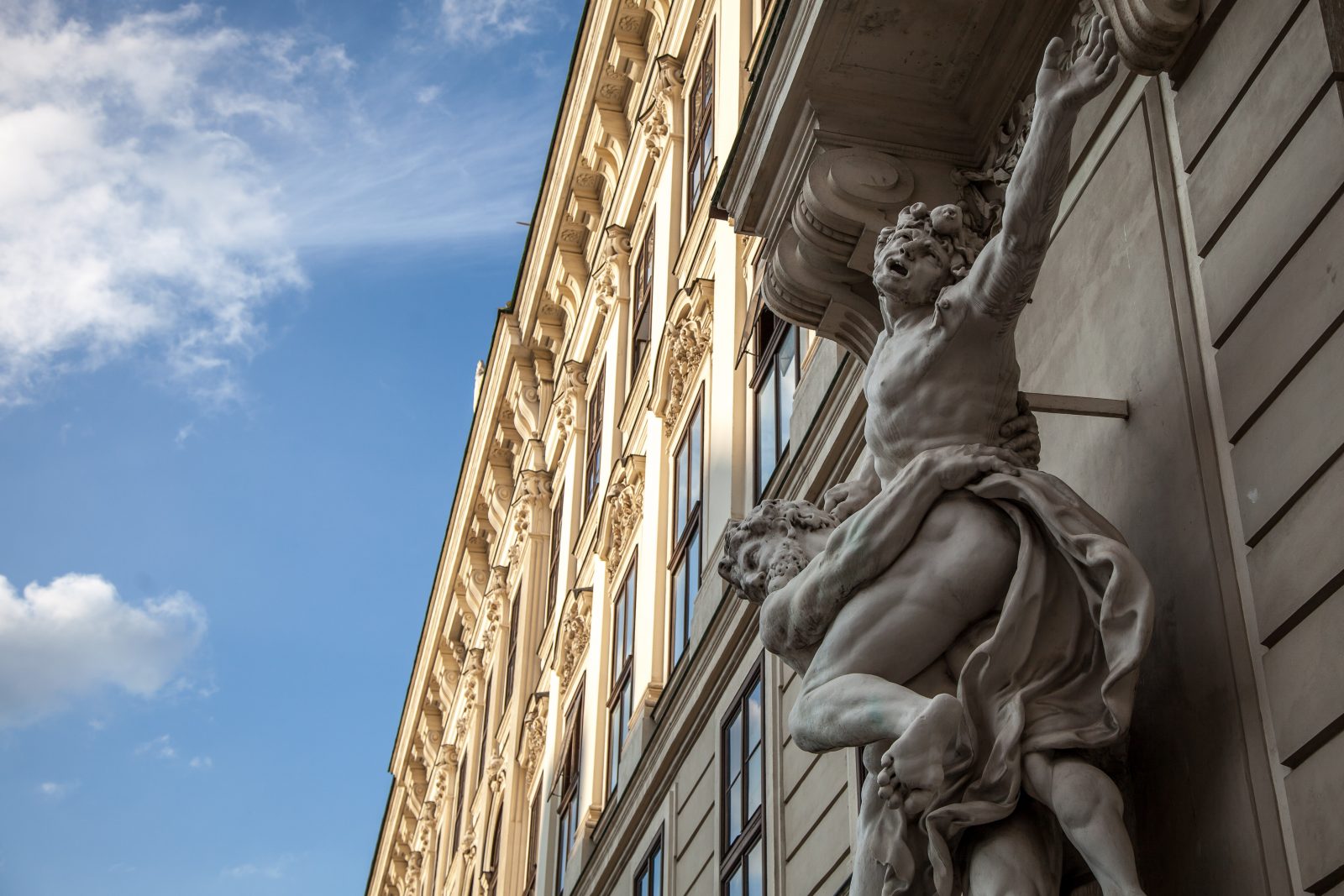 A necessary but punishing 7.15am Sunday morning flight from Luton left us in dire need of coffee and brunch on arrival in Austria, so we sped into Wien Mitte station on the CAT line (only 15 minutes from the airport), and headed straight to nearby Joseph Brot bakery and all-day café for a glorious feed. They have two more sites around the city, but those are purely focused on the bread and patisserie. Be warned – you might accidentally order a glass of riesling with your breakfast, and you will struggle to leave without a cake of some sort.

Ready to face the day, we dropped our bags at Hotel Daniel near Belvedere Palace, and acquainted ourselves with the efficient S & U-Bahn metro network in order to explore some heurigen around Heiligenstaedter Park to the north. What is a heuriger? Did Matt just make up a word? Is he sure that heurigen is the plural? In short, heuriger is the name given to rustic Austrian taverns where local winemakers serve their produce, with vineyards either on the premises or not too far away. Most also offer hearty food and regular live schrammelmusik, and pride themselves on their atmosphere of gemütlichkeit – look it up. N.B. There is some confusion surrounding the difference between a heuriger and a buschenschank – you can read more about that here, if you so wish! 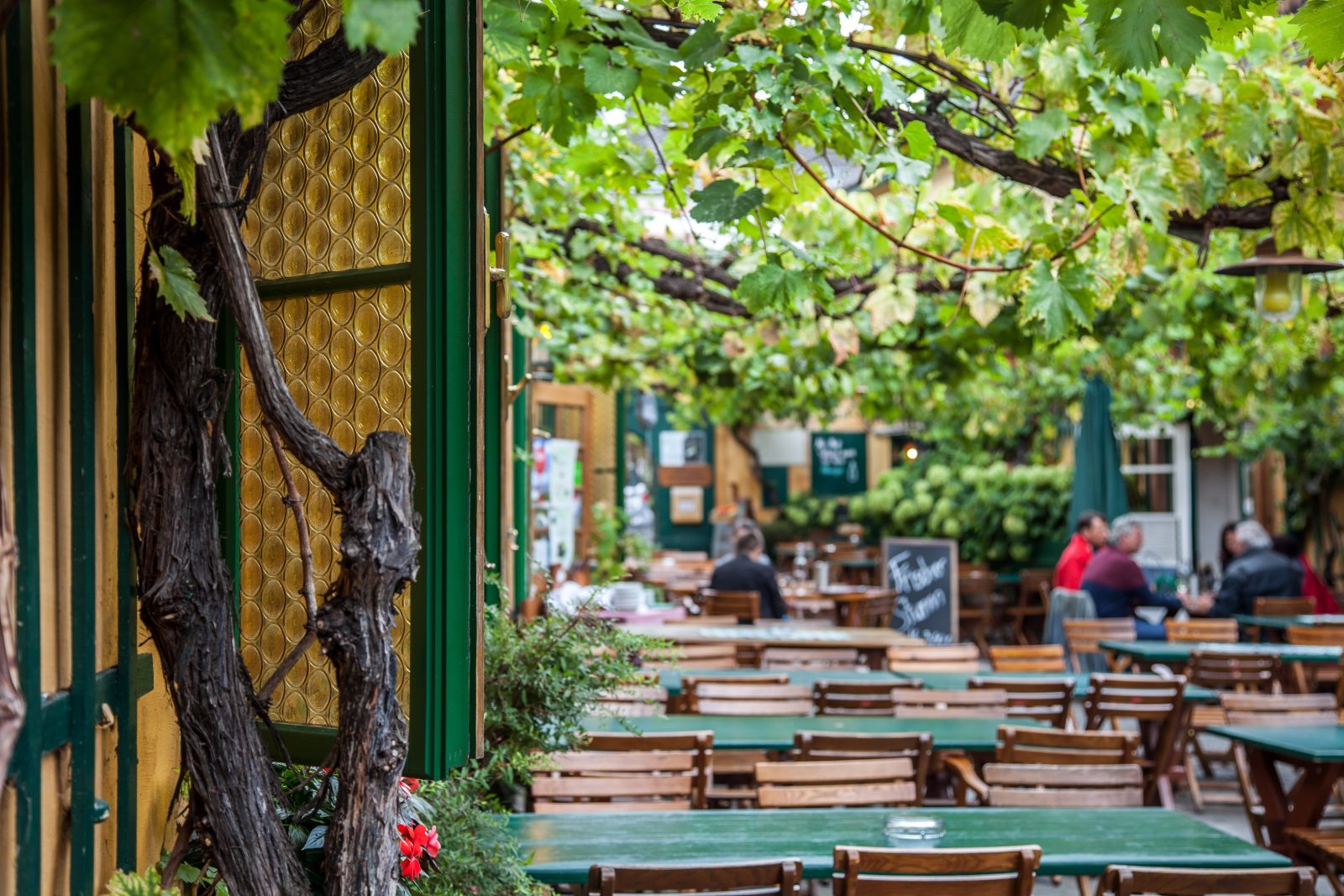 Sunday is a fairly sleepy day in Vienna, but there are usually plenty of heurigen open and they are very popular with the locals, not least because the wine is absurdly cheap! We decided to go on a little tavern crawl, starting with Mayer am Pfarrplatz, a beautiful winery famed for its connection to Beethoven – Ludwig moved in to a semi-detached house at the winery in 1817 and worked on his 9th Symphony during his time there, no doubt with a glass of their Wiener Gemischten Satz vom Nussberg in his hand. We enjoyed pours of their Grüner Veltliner and Zweigelt, before satisfying our curiousity with a cloudy glass of Sturm – a young wine that is basically fermented, freshly pressed grape juice. It’s lovely stuff – dangerously drinkable, lightly carbonated, reminiscent of cider, and it only appears once a year around the end of September, or “#sturmzeit“!

From Mayer Am Pfarrplatz, it was a short walk down the road to Muth (a flying visit) and Werner Welser, both of which carried the heuriger hallmarks of stunning outdoor spaces worth of wedding receptions and cosy interiors. At Werner Welser, we shared a carafe of their freshly released heuriger wein (“this year’s wine”) alongside some much needed cheese and meat. That clearly wasn’t enough sustenance, as Alex ordered a cordon bleu as soon as we arrived at winery number four, Heuriger Zimmermann. It more than hit the spot, especially when washed down with a glass of Blaufränkisch. Starting to feel the effects, we called time on our heuriger crawl and made our way back in to town. It was a great introduction to the unique Viennese wine culture, and I can’t wait to return to explore the vineyards in more depth.

Working our way back in to the centre, we stopped for drinks at The Sign, a cocktail lounge in a quiet part of town. Their regular menu is a mammoth list of classics, twists and creations, but on Sundays they showcase exciting booze brands with a special selection of drinks priced at €7. We were treated to some eclectic cocktails made with Zu Plun – a range of spirits from the Dolomites with eye-catching bottles. Pushing on, we had a cheeky half at Beaver Brewing Co, a lively, modern brewpub and kitchen with ten taps. Vienna doesn’t have a huge craft beer scene, but it’s definitely growing. Check out Mel’s Craft Beers & Diner, Craftmühle, Beer Store Vienna and Fassldippler for starters.

Next, we had our first taste of the Viennese coffeehouse culture at Café Landtmann. The apfelstrudel and nusstorte were both lovely, but the coffees were pretty dreadful and the prices were horrific. It was also far too hot inside, so we settled for the slightly tacky al fresco space. Luckily, I had better experiences the following day. We had soon forgotten anyway as Roberto’s American Bar swept us off our feet. Right in the centre, a schnitzel’s throw from St.Peter’s church, Roberto’s is an intimate, candlelit drinking den that keeps things simple and serves up exquisite cocktails. We tested them on our favourites – Negronis, Tommy’s Margaritas and Martinis – as the last of the daylight disappeared, unbeknownst to anyone inside.

After a quick lap of St.Stephen’s cathedral, we grabbed two bar stools at Kleinod, another superior cocktail joint with funky, futuristic lighting and banging booze. Here, we put East London Liquor Co’s London Dry Gin through it’s paces in some refreshing long drinks and soaked up the buzzing Sunday night vibe. Much like Paris and New York, many Viennese cocktail bars stay open til as late as 4am, with a würstelstand on hand round the corner – London still has a lot of catching up to do on that front. Having clocked up 20 hours awake on the trot, it was almost time for bed, but we squeezed in a nightcap beer at Kleines Café – an all-day bohemian hangout, with jugendstil (art nouveau) stylings and a theatre bar feel, that spills out on to stone-cobbled Franziskanerplatz.

Day 2 was less about booze and more about getting some tourist points before my flight. We sought out flat whites at the diminutive Kaffefabrik before Alex was whisked off to Innsbruck, leaving me to explore the city with my camera for company. My original plan for breakfast, a colourful café run by pensioners called Vollpension, was scuppered by unusual opening times, so I pressed on to the Naschmarkt – a sprawling collection of market stalls spread over a long thin stretch between two parallel roads. I plumped for Neni, a Middle Eastern eatery that is also connected to the Tel Aviv Beach spot on the Danube canal. Comforting shakshuka ensued.

Whilst in the area, I swung by Beerlovers – a truly outstanding beer shop with growler fills and a huge selection of bottles, cans, brewing equipment, glassware, and even some rather familiar spirits. Local beer geeks are truly lucky to have this in the neighbourhood. Further down Gumpendorfer Strasse, I then holed myself up in Café Sperl for a couple of hours, editing photos with a ludicrously sugary apfelstrudel on the side. It was a far more winning and affordable kaffee und kuchen establishment than Café Landtmann, though unfortunately it also had the seal of approval of a young Adolf Hitler. The pace of life was wonderfully slow inside Café Sperl, as locals perused the array of newspapers on offer, old friends caught up over a slice of sachertorte, and the odd tourist sipped on a mélange. 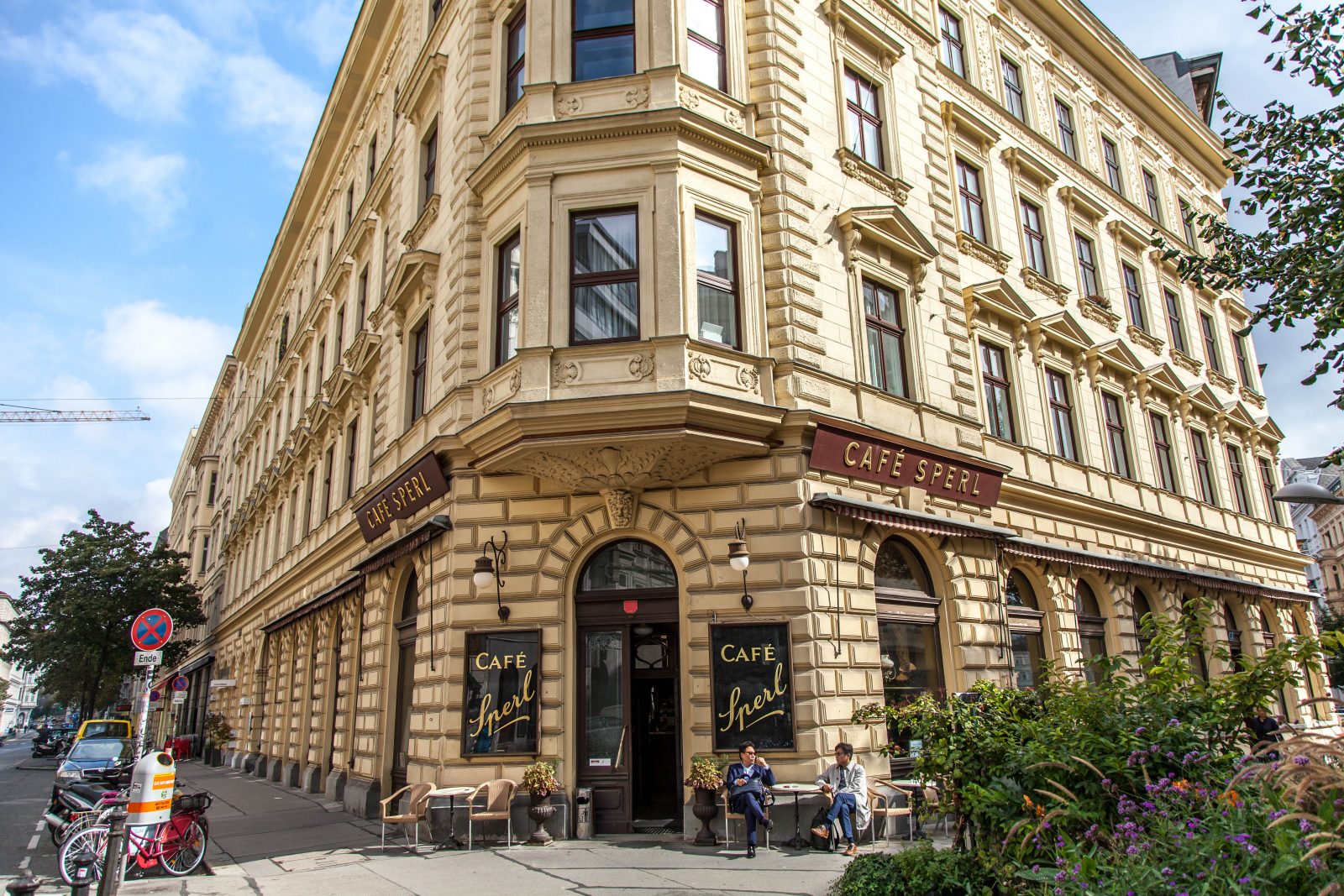 As the sun decided to put its hat on, I made the most the most of the blue skies and wandered around snapping away for the rest of the day, pausing only briefly along the way for a bit of sustenance or something. First, I checked out the “hipster” neighbourhood around Karmelitermarkt food market with a Balthasar coffee in hand – read more on that here. I then walked back over the Danube canal and in to the charming old town, stopping at the aforementioned, well-stocked Mel’s Craft Beers, right by peaceful Judenplatz.

I earned a messy kasekrainer (cheese-filled sausage) from Bitzinger’s Würstelstand by marching around Hofburg Palace, Heldenplatz, and Burggarten, waving at Mozart along the way, before slowly making my way back to Wien Mitte to catch the train. Naturally, I factored in a glass of Zweigelt from Palais Coburg’s wine cellars and a sunset stroll through the Stadtpark. And with a little time to spare, I ended the trip where it began, and in Viennese style, with coffee and cake at Joseph Brot.

First impressions? Despite our best efforts to turn up when everything was shut, Vienna’s unique charm still shone through, from the classic coffeehouses to the wonderful wineries. The cocktail and beer scene showed a lot of promise, and the Viennese were out in force til late on Sunday evening supporting the drinks industry. On top of that, the city has spectacular architecture round every corner, and the quality of life is enviable. In the words of a famous Austrian, “I’ll be back”.

Matt The Tips – Don’t hesitate to get in touch if you are planning a trip to Vienna and have any questions, or if you have some suggestions for places I should check out next time! Email me at matt@mattthelist.com

Plan your own adventure with Map The List : Vienna 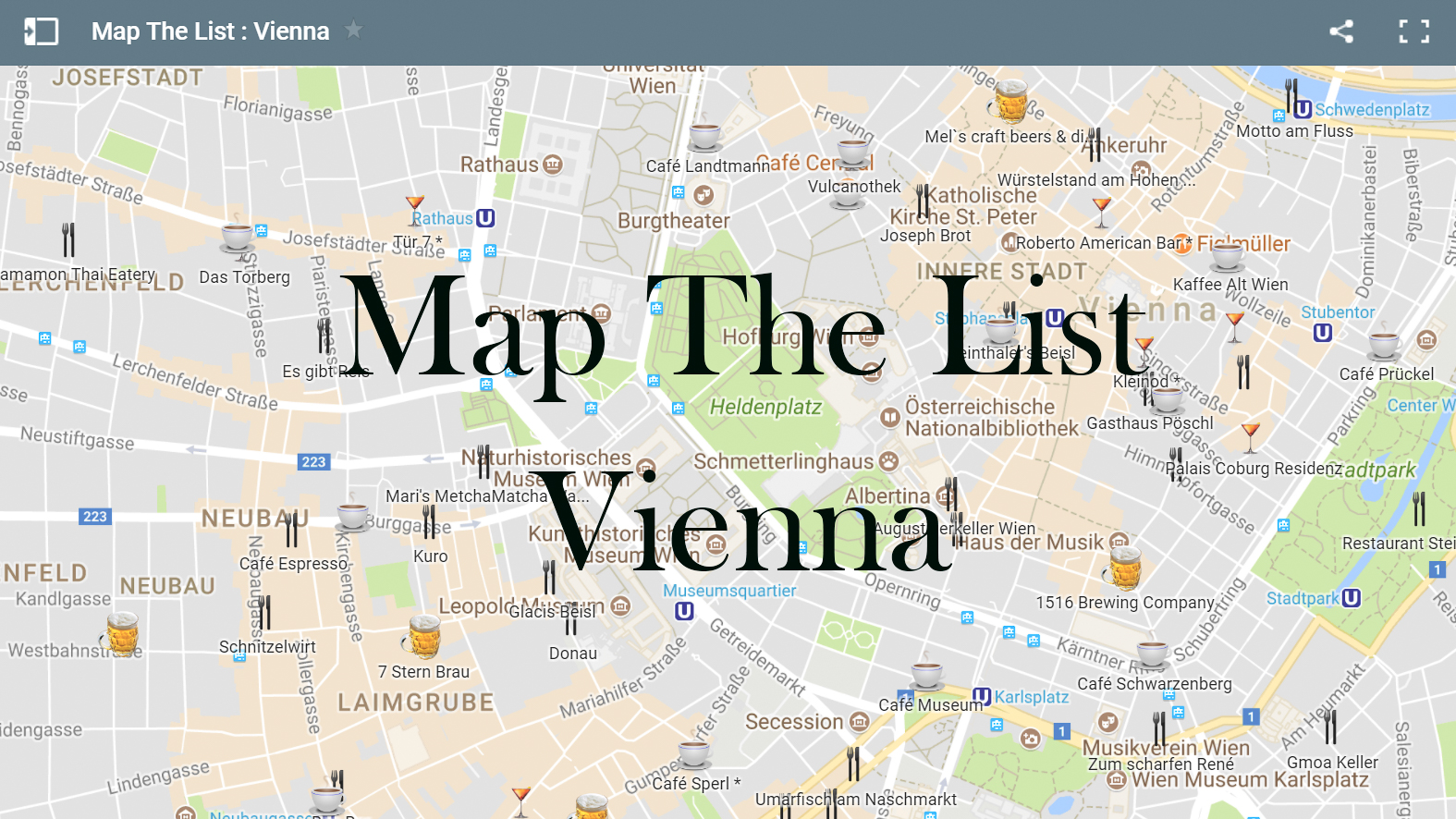 Many thanks to East London Liquor Company for enabling Matt & Alex’s boozy adventures!

If you want to know more about East London Liquor Company, click on the picture below… 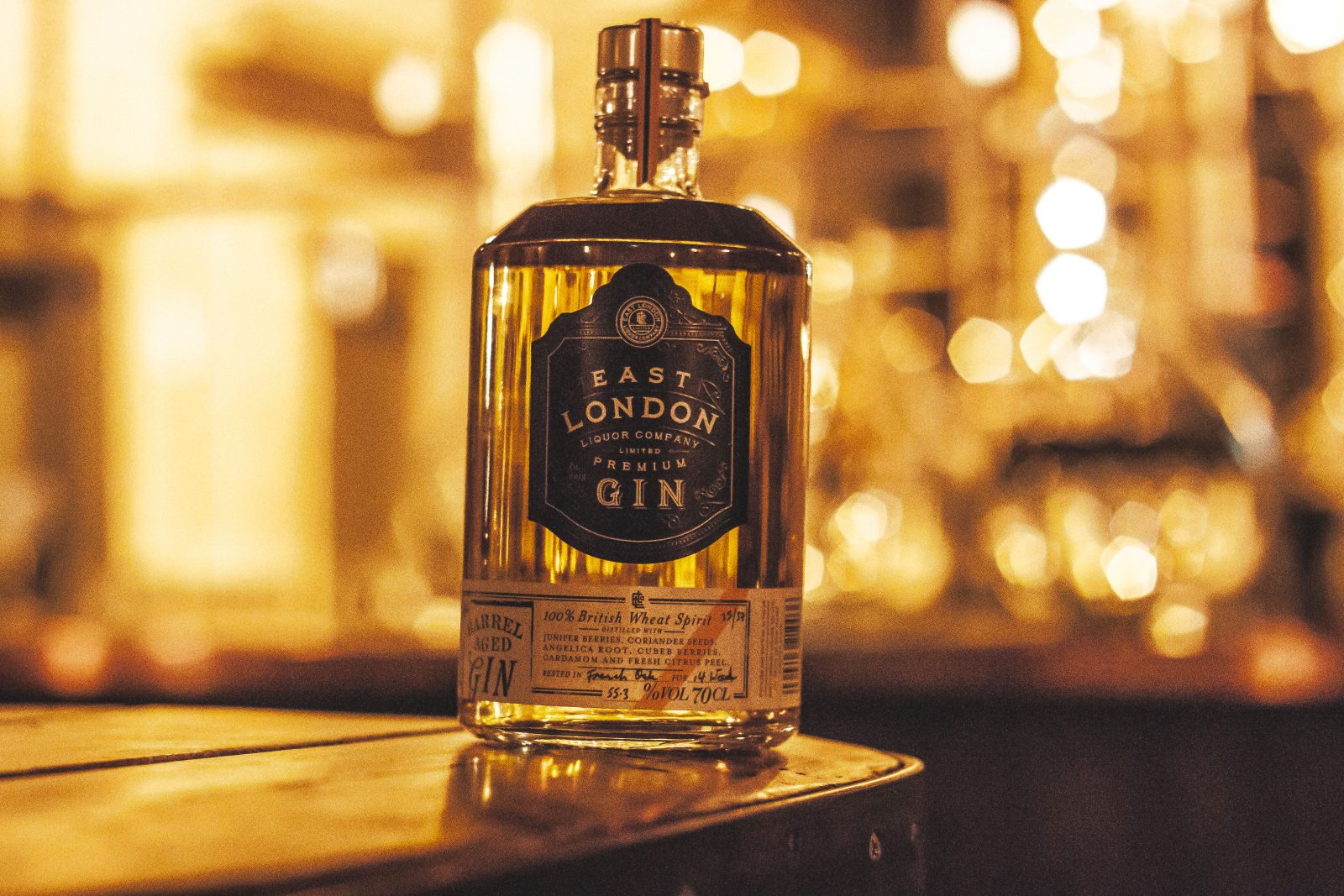 Postcards | Driving in the Dolomites